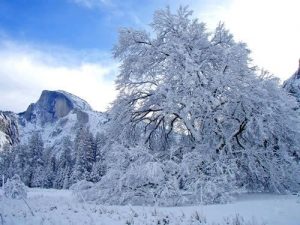 Yosemite, CA — Yosemite National Park Officials says it’s time to winterize the park. They say one way to get ready for old man winter is to take down the Half Dome Cables.


Ranger Kari Cobb says, “The top of Half Dome is at 8800 feet and it gets a lot of snow. Even going up the cables in the summer time with rain and thunderstorms can be dangerous, but in the winter time when it’s covered we don’t want anyone attempting to go up the cables for safety reasons so we take them down.”

The Half Dome Cables will come down for the season this Tuesday, October 9th and will not go back up until weather permits in the spring.

Cobb says visitors are strongly advised against attempting to climb the summit without the cables as the dome can be extremely slippery and could be wet and icy even in seemingly dry conditions.