A Pound Of Pot Bust 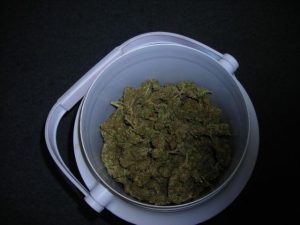 Police report when officers arrived on the scene they smelled a strong odor of marijuana coming from the vehicle. Also, officers say 19 year old Kevin Davis of Turlock was clearly under the influence of a controlled substance.

Police say a search of the vehicle resulted in almost a pound of processed marijuana. They say there were several mason jars full of pot. Each jar held 50 grams. Officers also say they found a large 2 gallon thermos with 205 grams of marijuana.

Chief Mark Stinson says “The incident happened around 2:30 in the afternoon so students were still in class. However, Davis could face additional charges for having drugs in a school zone with students present. That will be up to the District Attorney.”

Stinson says Davis was on his way to pick up a relative at the school.  Davis was arrested and charged with felony transporting and sales of marijuana and misdemeanor driving under the influence of a controlled substance.