A Sonora Man Wanted For Assault 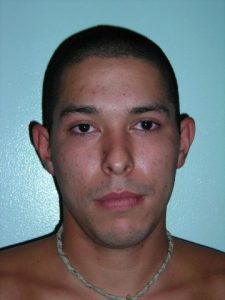 Sonora, CA – Sonora Police Officers were called to the 100 block of Columbia Way following an assault on Sunday night around 11:30pm. Police report officers found 31 year old Jonathan Douglas of Sonora, unconscious and suffering from a severe head injury. Police say because of Douglas’ head injury he was flown to Doctor’s Medical Center in Modesto for treatment.


Police report two suspects in the assault were identified from witness statements and physical evidence at the scene. They say the witnesses didn’t see the suspects use any weapons.

Police are still searching for the second suspect 28 year old Fredrick Rivette of Sonora. Rivette’s picture is attached to this story. He is a white male, 6 feet tall, 170 pounds with black hair and brown eyes. If you know the whereabouts of Rivette, please call the Sonora Police Department at (209) 532-8141.