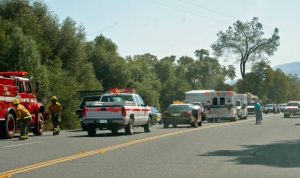 San Andreas, CA – Two people died and one person was air-lifted to Sacramento after a crash on Highway 49 near San Andreas. It happened around 1pm Saturday near the Carol Kennedy Road intersection.


The CHP reports 52 year old Penny Miles of Murphys and 49 year old Eleazar Rodriguez of Galt, California were both dead at the scene of the crash when emergency crews arrived.

CHP says Miles was driving south on Highway 49, when possibly due to her intoxication, she veered her 2007 Toyota Tacoma over the double yellow lines and smashed head-on into Rodriguez’s 1996 Chevy Box Truck in the far northbound lane.

A passenger in Rodriguez’s car suffered major injuries and was air-lifted to UC Davis Medical Center. CHP list her as a “Jane Doe” on their report.

Click here for a map of the accident scene.