Sonora Man Sets Himself On Fire 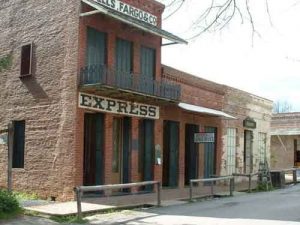 Columbia, CA — Tuolumne County Sheriff’s Officials say the CHP got a call from a suicidal man on Wednesday around 3:30 in the afternoon and alerted deputies.

When deputies arrived on the scene off Highway 49 near the south entrance to Columbia State Historic Park they found the 54 year old man from Sonora in a small cave claiming he had a gun. The man came out of the cave and poured a flammable liquid over himself.

Sgt. Jeff Wilson says “As deputies approached, he struck a lighter and was immediately engulfed in flames. One of our personnel went back to his patrol car and retrieved a fire extinguisher and put the fire out.” Wilson adds, “The fire spread to surrounding bushes and that had to be put out as well.”

Wilson says the man was air-lifted to a medical center and he is in “very serious” condition. He say “We can’t reveal his name or any personal information since the man is on a 51-50 (psychiatric hold).”

Sheriff’s Officials say no gun was found at the scene.

Also, helping out in the incident were the state park rangers, Tuolumne Fire Department, and Columbia Fire Protection District.