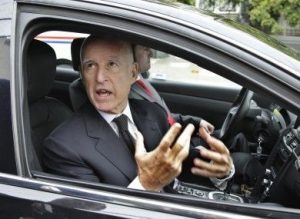 Will physically driving a car someday be a thing of the past?

Google has a fleet of self driving vehicles that has already logged 300,000 test miles on California’s roads and highways. At the bill signing, Brown stated, “Today we’re looking at science fiction, becoming tomorrow’s reality.”

SB 1298 also creates an application and review process for self driving cars, establishes safety and performance standards, and allows a licensed driver to test drive an autonomous vehicle.