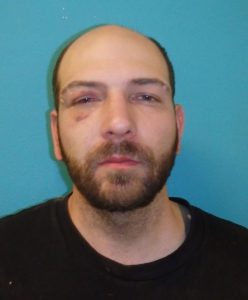 Sonora, CA – A wanted man’s attempt to flee arrest did not go well as he did not get far.

An employee at a business in the 900 block of Mono Way called Sonora Police Thursday morning reporting a suspicious man inside the enclosure for their trash bins. When first approached by a Sonora Police Officer, the suspect gave a false name.

Chief Turu VanderWheel details, “Our officer demanded to see his identification and date of birth as which point he took off running. She ended up chasing him for about 50 yards and tackled him.”

He was eventually identified as 33-year-old Roy Allen Chandler Jr., a transient. His past warrants included a felony for violating his probation by having a dangerous weapon, dirk or dagger, and misdemeanor drug related charges.

Chandler Jr. was found to be carrying various drug paraphernalia and burglary tools. He was arrested for having those items along with obstructing a police officer and providing false identification.