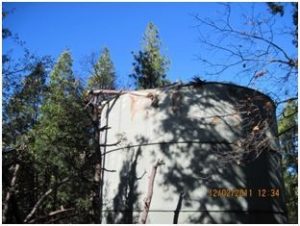 The new larger water storage tank is 24 feet tall with a small turbine to power monitoring sensors. It replaces a 125,000 gallon tank that was damaged last winter by a large tree and referred to as the “Zone 2” tank. This tank will also replace the Meadowbrook Tank #1 in Lakewood. It held 125,000 gallons and is also in poor condition.

Through a competitive bidding process, Superior Tank from Rancho Cucamonga was selected to construct the new tank. Erik Johnson, TUD Associate Engineer overseeing the project says, “We are very pleased with the rate at which the tank is being assembled. We should have this ready and in place in time for the ditch outage, when we will need it the most.” Construction began on September 4th. A local company, Condor, did site analysis. The tank was constructed with modern building techniques expected to last many decades with basic maintenance.

The new larger 600,000 gallon tank is part of a consolidation plan which will replace four water storage tanks, saving district customers over $150,000 over the next ten years and provide an additional 131,000 gallon in storage. The estimated total cost for the project is just over $390,000.