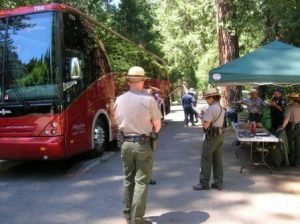 The operation was carried out last week in Yosemite Valley. Over the course of two days, 54 buses were inspected and 65 violations were identified. Five buses were placed out of service, mostly due to defective brake systems. Additionally, two drivers were placed out of service due to licensing and log book violations. The CHP reports that in most cases, on site repairs were made, or replacement buses were immediately dispatched to the scene, in an effort not to inconvenience Yosemite Valley guests.

The CHP plans to conduct more unannounced tour bus inspections in the near future.