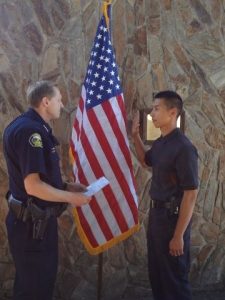 Sonora, CA — The City of Sonora’s Police Department has a new officer and this one has made history already.


Chief Mark Stinson says Johnathan Ma has been hired on to the force and he is the first Asian American Officer to be hired by the Sonora Police Department. Stinson says Ma successfully completed all related testing, as well as an extensive background investigation, before being appointed to the position of Police Officer.

Sonora Police say in Johnathan’s free time, he likes spending time outdoors with his friends. He enjoys camping, fishing, snowboarding, rock climbing, pistol shooting and sightseeing. They say he also enjoys working on small projects around his house and working on vehicles.