Thieves Get Away With Collectibles 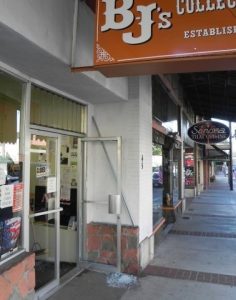 Sonora, CA — A local sports cards shop was broken into early this morning.

The Sonora Police Department reports that two males broke through a window at B.J.’s Cards and Collectables during the six o’clock hour and escaped with an undisclosed amount of cards and coins. The business is located at 45 South Washington Street. The crime was witnessed by a school bus driver, who saw the men escape in an older style white Chevy Astro van. Two other witnesses also contacted the police department with information regarding the suspects and their vehicle.

The Police Department reports that one of the men is described as being African-American with sunglasses and curly hair. The other is described as having dark complexion and dark hair. Both men are “heavier set.”

Anyone with information regarding the crime should contact the Sonora PD at 532-8141.