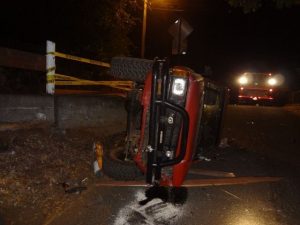 Sonora, CA — The Sonora Police Department arrested a man that fled the scene of a DUI accident last night.

It happened at around 11:40pm at the intersection of North Shepherd Street and Elkin Street. A 1985 Toyota 4 Runner knocked out approximately 20 feet of wooden guardrail and rolled over. The driver, 38-year-old James Nathan, took off running when officers started to arrive. He was later arrested at his nearby residence. The Police Department reports that Nathan was uncooperative when he was taken into custody. He faces charges of driving under the influence and felony hit and run. Nathan has a prior DUI conviction.