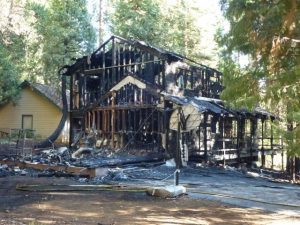 Arnold, CA — Officials are investigating a fire that destroyed an Arnold home earlier this week.

CAL Fire reports that crews were on scene throughout early Tuesday morning extinguishing the fire that started shortly before midnight in the 100 block of Moran Road. No one was hurt. The home was fully involved when the first responders arrived, and it also burned a small spot of vegetation.