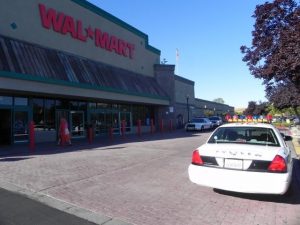 Sonora, CA – Sonora Police says this may have been the suspect’s second attempt to rob the Wal-Mart on 1101 Sanguinetti Rd in Sonora. They say on Monday around 11:00 pm, a white male adult got into an unauthorized area of the store and several employees in the restricted area asked him to leave which he did. However, Police says the employees noticed right away that the man was wearing a fake beard and wig. Employees described the man to police as around 6’2″, medium build, around 200 pounds, wearing a gray sweatshirt, black jeans, a bandana, tan boots and had a walking cane with him. Sonora Police say that incident was not reported to authorities.

Police say on Tuesday around 5:30 am, the same subject came back to Wal-Mart and started pacing back and forth in front of the store. Employees told police the subject was dressed exactly as he was the night before, including the fake beard and wig.

Tuolumne County Sheriff’s Deputies were called in to help with the search, but the suspect was not found.

Sonora Police are asking for anyone with information regarding this incident to call the Sonora Police Department at (209) 532-8141.

Click here for a map of the robbery site.