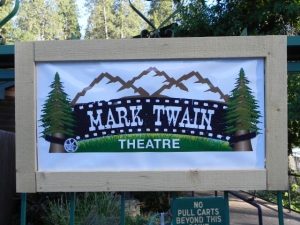 The event drew filmmakers and film buffs alike to the Mother Lode this Labor Day weekend. The festival kicked off Friday night and concluded this afternoon.

One of the dignitaries on hand was Veronica Cartwright, who is known for films like Alfred Hitchcock’s, “The Birds.” Cartwright says she is often asked about her experience working with the legendary Hitchcock, and is quick to point out that he had a strong presence on the set. “He wore three piece suits all the time, and every afternoon at four-thirty he would have his tea, and everything would just sort of stop,” says Cartwright. “He was terrific. I was only 12 years old, but he was very kind to me, and I could ask him questions, and he taught me the ‘magic of the movies.’

Another recognizable actor on hand was Jeffrey Weissman. He played George McFly in Back to the Future Two and Three, and starred in a couple of films that were shown at the festival. Weissman was on hand for the inaugural festival last year, and says there are aspects that make this particular event unique. “This is a smaller film festival, but it has big heart,” says Weissman. “I find that film festivals that I go to are usually all business and a grind, and this is much more pleasing because of the pace, and the appreciation for the art form.”

Weissman appeared in two short films directed by Heather Donnell, “Shadow Angel” and Bottle Caps.” He also starred in the film “Nobody’s Laughing.” Sunday evening he made a special appearance as Mark Twain to announce this year’s winners.

Director/Actor Emmy Collins pointed out the local hospitality. “It is a small community and everyone is super nice, from the directors, to the programmers to the restaurants,” says Collins. “It just has a real small town feel, and it’s beautiful.”

One of Collins’ films was “The Chicken Motel.” He describes it as a “wacky” film shot in Georgia where he saves a chicken from a processing plant.

Director Jimbo Barnett also praised the venue. On Saturday and Sunday he showed his film “Oh, Mr. Faulkner, Do You Write?”

“It is exciting to see a place as beautiful as Twain Harte, and the people are very friendly,” he says. “There’s so much angst when you’re trying to put a film together and get a something made, and this is the part that you should really try to enjoy.”

This year’s winners include:

Best Short Film – “Buttons in the Ground” by Trenton Waterson