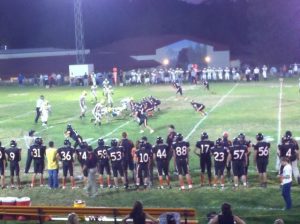 Justin Flores, play-by-play announcer for the Bears, was Thursday’s KVML “Newsmaker of the Day”.

Flores had been calling the Wildcat games for the last ten years with color analyst Steve Lee, who has been a part of the Wildcat broadcasts for the past sixteen years.

But now Flores has switched hats and is the voice of the Bears.

“Strictly a family decision,” said Flores. “My children have attended, are attending and will soon attend Summerville.”

The Bears are on the road this evening, playing Mariposa High School in Mariposa.

The Bears games are broadcast on KKBN 93.5 FM. Star 92.7 FM which will continue to broadcast Wildcat games each Friday at 7:30pm.

In addition to the radio broadcasts, all Wildcat and Bears games are streamed live on mymotherlode.com.

Season schedules for the Bears, Wildcats, Bret Harte Bullfrogs and the Calaveras Redskins can be found by clicking this link: /sports/high-school-sports.php