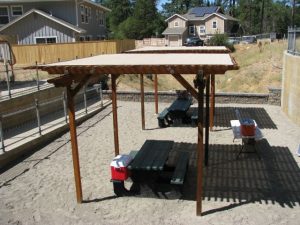 Columbia, CA — The smell of fresh hamburgers and hot dogs will soon be coming from Habitat For Humanity’s new Parrotts Ferry Village.

Over the weekend a ribbon cutting event was held to dedicate a new BBQ park built by the 49er Rotary Club. The project took 12 weekends of physical labor, not to mention the time it took to design the park and make sure it received approval through the county review process.
Local Habitat for Humanity Executive Director Betsy Harden reports that each year the Rotary Club President picks a special project for the club to complete. She says Frank Smart suggested to club President, Ryan Coit, to build the community BBQ. It is noted that Rotary member Erik Johnson, an engineer for T.U.D., designed the pergolas that shade the area. About half of the Rotary members were directly involved in building the BBQ park.