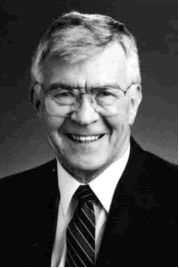 
Lepape was born in Sonora, CA on November 26, 1930. He spent his youth in Sonora before attending Stanford University where he earned a bachelor’s degree in Engineering and a doctorate in Law. In 1955 Lepape married the love of his life Marilyn Earley, and they settled down on the Palos Verdes Peninsula in California.

In 1961 he began his 32 year career with the company which would become Pacific Enterprises, eventually rising to the position of Chairman of energy resources companies for Pacific Enterprises. In 1990 he was named to the additional post of Executive Vice President of Pacific Enterprises. He developed business relationships which allowed him to acquire natural gas supplies in the Arctic, Alaska, Western Canada, the Dutch North Sea and the Southwest United States. Lepape served with distinction as a Director of the Interstate Natural Gas Association of America and as a Director of Foothills Pipelines of Calgary, Alberta, Canada. He also volunteered his service as a member of the U.S. Dept. of Commerce Industry Sector Advisory Committee on Energy Policy for Trade Matters.

Lepape’s family notes after retiring in 1993, Lepape finally had the opportunity to complete his dream home in Gig Harbor, WA, where he enjoyed having more time to spend with his family. He spent many hours volunteering with senior citizens explaining the intricacies of Social Security and Medicare supplement plans, as well as volunteering at the Pierce County courthouse assisting low income people to navigate their way through the legal maze of the court system.

The family says in 2001 Lepape was instrumental in the revival of the Soap Box Derby in Sonora, providing seed money and counsel to the event. He was a 50 year member of the Masonic Lodge in Sonora.

Lepape is survived by his wife Marilyn, daughters Linda (Bryan) and Jeanne (Joel), grandchildren Kasey, Robin, Sarah and Jacob, sisters Ellen (Erik) and Kathleen (Robert) and cousins Russell, David, Andy, Ted, and Debbie, several nieces and nephews, and grandnieces and grandnephews. He was predeceased by his son Jeffrey and his sister Ruthie.

Online condolences can be sent to www.gaffneycares.com