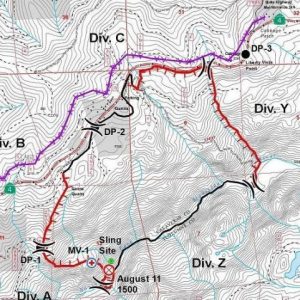 1,155 acres has burned about 10 miles east of Dorrington. Fire crews made good progress yesterday completing a fire line on the east side of the fire. Steep terrain, and limited access along the Stanislaus River, remains a major challenge to containing the west side of the fire. A portable retardant mixing station has been set up at Bear Valley so that helicopters can reload more quickly.

Motorists traveling on Highway 4 should prepare for delays this weekend. Visibility is low due to smoke.

As reported previously, the Forest Service says the 16 homes in the area are no longer considered in danger. Three firefighters have reported injuries.