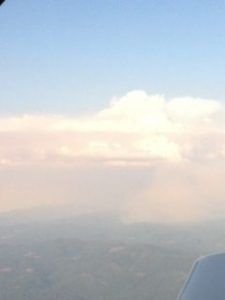 Cottage Springs, CA — The Ramsey Fire is now 1000 acres down from 1250 acres reported earlier by Forest Officials and it is now 15 percent contained.

Forest Officials report the heat and winds continue to fan the flames. They say the heavy smoke and fires continue to cause Highway 4 in Calaveras County to be shut down or one lane closed off intermittently, so motorists will want to find an alternative route this morning. The closed section is along a seven mile stretch from the Cottage Springs Picnic area to the Caltrans Cabbage Patch Service station about 15 miles above Arnold.

Forest Officials say the rate of spread is moderate to high. They say crews will hit the flames from the air and ground today.

Besides the rough terrain, Forest Service Spokesperson Jerry Snyder say bees are causing a problem. He says two firefighters were repeatedly stung by a swarm of bees on Tuesday. They were air lifted to Modesto and treated and released.

Snyder says a fire strike team did their job and the half a dozen homes in the Ganns Meadows area that were threatened are now out of danger. He says containment of the blaze, which started as an escaped campfire, is estimated on August 21st.

Agencies assisting include the Ebbetts Pass Fire District, CAL Fire and the CHP