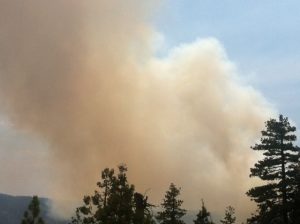 Arnold, CA — A fire in the Calaveras Ranger District of the Stanislaus National Forest has grown to 400 acres.

The Ramsey Fire is located along the north slope of the North Fork of the Stanislaus River. It is between the town of Dorrington and the nearby Cabbage Patch Maintenance Station.

Forest Service Spokesperson Jerry Snyder says officials believe it was the result of an escaped campfire. It was first spotted at around 2:45pm on Saturday. Some vacation cabins and homes are in the area, but they are not considered in danger at this time. There are no evacuation orders in place.

High temperatures, and steep canyons, have posed problems for firefighters. One firefighter suffered heat stroke over the weekend. He was taken to a Modesto hospital and has since been released.

274 firefighters are assisting the effort, and the fire is considered 20 percent contained. It is burning northwest, and is approximately ½ mile from Highway 4. Firefighters have been able to slow the spread significantly over the past 24 hours and are hoping that it will not reach the highway.