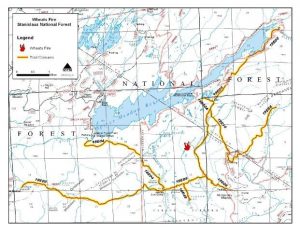 The “Wheats Fire” is now 130 acres. Forest officials say it is consuming red fir at a rapid rate sending up plumes of smoke within the Carson -Iceberg Wilderness of the Stanislaus National Forest. They believe the flames were ignited by a lightning strike over the weekend.

Forest officials say granite rocks and light winds are making it difficult to fully contain the blaze located west of the Dardanelles. Crews are on scene from both the U.S. Forest Service and the Me-Wuk Rancheria Fire Department.

Forest officials say today they will be switching out fire crews and establishing indirect fire lines. A fire camp will be set up at the Spicer Reservoir Group Campground with a boat ride and a 20 minute hike to access the northern perimeter of the fire. The Forest will close several trails in the area starting today (see attached map for details).

Because legislation restricts use of mechanical devices in wilderness areas special authority has been granted to use chainsaws and water pumps.

There are no road closures in effect or structures in danger.