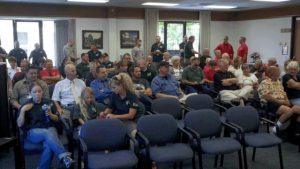 Sonora, CA — While not official until the final budget hearing next month, the Tuolumne County Supervisors are planning to restore many positions that were initially on the chopping block.


The fiscal year 2012-13 budget will be finalized at the first meeting in September, but the Supervisors gave direction to county staff Tuesday about what they would like to see included. They plan to restore five vacant law enforcement positions, two victim witness advocates from part-time to full-time, and will avoid laying off an office technician within the Animal Control Department. Money is freed up due to unexpected revenues from the Secure Rural Schools Act and Payment In-Lieu of Taxes (PILT).

Other items are still in up in the air include whether to fund some additional programs and a Jail Commander.