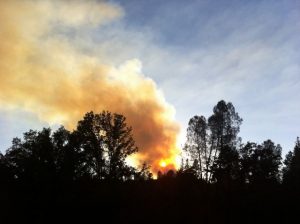 Roads around the Armario Fire are back open, and residents that took off last night are allowed to return to their homes.

That’s according to CAL FIRE, which notes that the fire is located in the 19100 block of Armario Road in Soulsbyville. It started during the six o’clock hour.

The Sheriff’s Office reports that no evacuations were called for last night, but those that did leave there homes were not allowed to return because of the numerous fire resources in the area. Two structures were destroyed, as well as an outbuilding, travel trailer and pickup truck.

CAL FIRE says the blaze is currently 40 acres and 25 percent contained. There are 15 engines, six fire crews and one dozer on scene this morning.

At one point 1,300 PG&E customers were without power, but they were restored by early this morning.

The cause of the fire is still unknown. A special thanks to community members Clare Tessman, Isaac Kight, Kathy Syverson, Kenny Morris, and Katie Canada who sent in photos or provided eye witness accounts from the scene.