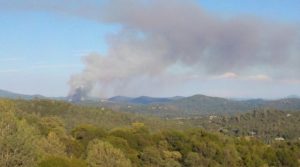 Soulsbyville, CA — CAL Fire says the fire has grown to 40 acres and is 20 percent contained and 16 engines are on the scene. They say crews will continue to battle the blaze overnight.


The flames started at Armario Road and Elliot Road off of Soulsbyville Road. CAL Fire says two residential structures, one an A-frame and a stick frame, as well as one out building, one pick-up and one travel trailer were all damaged in the fire. The blaze also came near Covers Apple Ranch.


Tuolumne County Sheriff’s Sgt. Jeff Wilson says there were no evacuations. However, CAL Fire says those people who left their homes vouluntarily when the fire first broke out will not be allowed back into the area. They say an evacuation center has been set up at the Soulsbyville Club House off of Willow Springs Road.


CAL Fire says power lines are down and nearly 1300 people are without power. PG & E is on the scene trying to fix the lines and restore power.

CAL Fire reports Soulsbyville Road is closed between Black Oak and Willow Springs Road. No word on what sparked the blaze, CAL Fire says they are still investigating.

Click here to view a map of the fire area.

A special thanks to community members Isaac Kight, Kathy Syverson, Kenny Morris, and Katie Canada who sent in photos or provided eye witness accounts from the scene.