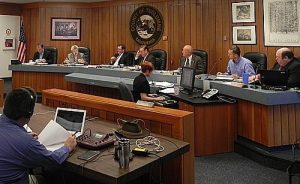 The Tuolumne County Supervisors will continue their discussions about the new budget.

During Tuesday’s meeting the board will hold a public hearing to discuss modifications to the 2012-13 spending plan. Different departments have been calling for reduced cuts…notably law enforcement services. The budget itself would not be adopted until after a public hearing on September 4th. Tuesday’s meeting is to give direction to staff members about the preparation of the final document.

There will also be time set aside to hear a one-year report on the creation of the Community Resources Agency, which merged the Public Works and Community Development Departments.

The Supervisors will also vote on furloughs and the closure of most county offices around Thanksgiving, Christmas and New Years. Tuesday’s meeting begins at 9am in the Supervisors meeting room. It will be streamed live in the multimedia section of myMotherLode.com.