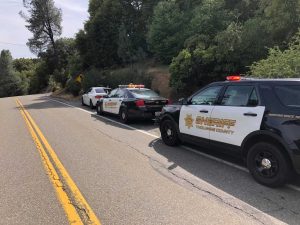 Sonora, CA – As a BMW flew by a Tuolumne Sheriff’s County Deputy turned around in pursuit, and after pulling over the sedan Tuesday afternoon, uncovered evidence of drug sales.

While the deputy first spotted the car in the Big Hill area, he did not catch up to it until the intersection of Phoenix Lake Road and Oakhaven Lane in Sonora. That is when he also noticed that the vehicle had no front license plate and unreadable rear plate tags. A records check of the car revealed that it was bought in Ohio and its registration was expired. The driver, 21-year-old Andreas Handley of Stockton, was also on probation out of San Joaquin County.

A subsequent search of the sedan uncovered nearly 10 grams of methamphetamine, drug paraphernalia, drug packaging, a digital scale, evidence of drug sales and over $1400 in cash. Handley was taken into custody without incident. He faces possession and transportation of a controlled substance for sale and possession of drug paraphernalia.