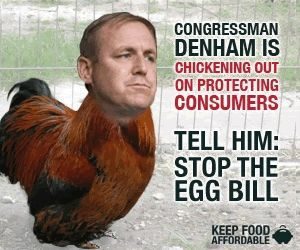 Sonora, CA — Congressman Jeff Denham is a target of national ad campaign about standards for the treatment of egg laying hens.

Earlier this year Denham was the co-sponsor of a bill that would have effectively required the federal government to adopt similar requirements passed in California back in 2008. The Proposition 2 ballot measure was approved by voters, 63%-33%, and requires hens to be able to stand up, lie down, and fully extend their limbs. Many suppliers were required to update their facilities and incur some additional costs. Denham has several egg producers in his District 19, and a change in federal law would be designed to level the playing field for California egg suppliers.

The federal legislation failed to gain ground last January when there was talk that it could be added to the Farm Bill. However, it recently gained a renewed life when Senator Diane Feinstein began pushing it forward. The proposal has prompted an ad campaign by the opposition group “Keep Food Affordable,” which is funded by the National Pork Producers. They are calling it a “rotten egg policy” and claim it would push up the price of food. Pictured is an ad featuring Denham.

The legislation has been praised by groups like the National Humane Society. Denham is a Republican, whose District 19 covers Tuolumne County.