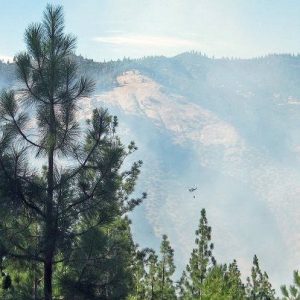 Groveland, CA — Some additional smoke has been visible near the Graham Fire in Groveland.

CAL Fire Spokesperson Lisa Williams says thankfully, “It is coming from the interior of the fire, and not the perimeter.”

The fire is still 100 acres and five percent contained. Residents in the area may have noticed that there was a delay getting the air attack off the ground this morning. A mechanical issue was found with the spotter plane, so a different one had to be brought in from Sacramento. To view a map of the fire area click here.

CAL Fire has updated the acreage of the Penn Fire near Murphys to 180. It is slightly smaller than initial estimates last night. CAL Fire reports that there are 260 firefighters on hand battling the blaze. To view a map of the region, click here.

No homes are in immediate danger with either of the two fires. Crews are expected to remain on scene for at least the next day or two.

To view an earlier story about a firefighter injured yesterday afternoon in Murphys, click here.