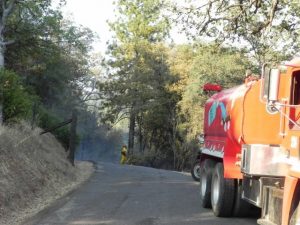 The CHP reports that a CAL Fire worker from Modesto was injured in yesterday’s vehicle accident on Skunk Ranch Road.

CAL Fire had parked an engine across Skunk Ranch Road so that no vehicles would drive near the incident known as the Penn Fire. The smoke became so thick that Kirsten Vader of Murphys could not see the engine up ahead and drove her Mazda Miata into 39-year-old firefighter Nathan Fyock, who was standing alongside the roadway. The Miata then continued westbound and broadsided the fire engine.

Fyock was life-flighted to Modesto Memorial Hospital to treat reported “major injuries.” Vader was not hurt in the crash. The CHP reports that there was nearly “zero visibility” at the time of the accident.

To read the latest update on the two fires, click here.