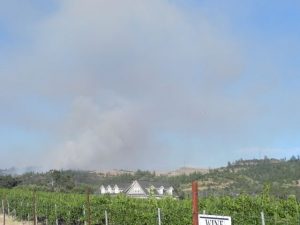 In Calaveras County, CAL Fire says a house fire that sparked a vegetation blaze near Murphys is now nearly 180 acres. It started around 3:30 Wednesday afternoon near Skunk Ranch Road and Pennsylvania Gulch Road.  Cal Fire says structures are in danger.

CAL Fire spokesperson Lisa Williams says “We have plenty of crews battling the blaze with 20 engines, 15 water tenders, 10 hand crews, 4 dozers, and 4 tankers and helicopters.” Williams adds “There was a threat to some power lines, but crews were able to keep the flames from reaching them.” Williams says there is no containment yet.

Also during that blaze, CHP says a firefighter had to be airlifted to Modesto after the engine he was riding in got into an accident with a vehicle on Pennsylvania Gulch Road. There is no word on his injuries. CHP says many motorists stopped on the roadways to see the nearly 50 foot flames causing traffic problems for CAL Fire crews trying to get to the blaze.

In Tuolumne County, crews are also battling a 100 acre grass fire near Graham Ranch Road and Clements Road in Groveland. CAL Fire is on the scene with six engine, a dozer, helicopter, 2 tankers and air attack They says the vegetation fire started around 3pm Wednesday. CAL Fire says there is no danger to any structures and this fire is not contained either.