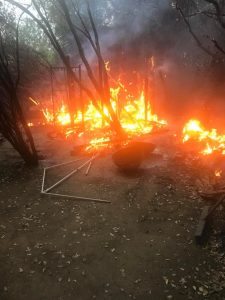 We reported yesterday that the blaze was in an area above Adventist Health Sonora. The Sonora Police Department reports that the location “was determined to be an empty homeless encampment.” The fire destroyed an outbuilding and burned 1/8 of an acre of vegetation.

The cause of the fire is still under investigation. No injuries were reported. Smoke was visible from various vantage points throughout Sonora, shortly after it ignited during the seven o’clock hour.  Resources responded from the Sonora Fire Department, CAL Fire and other agencies.