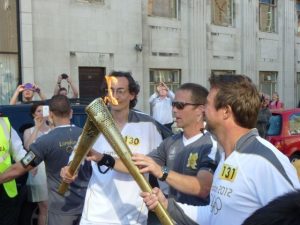 Groveland, CA — Robert James Johnson, who owns a home in Groveland, carried the Olympic flame in the city of Liverpool, England.

Some 275,000 people were gathered, on June 1st, the day Johnson carried the torch for approximately 1/4 mile. He says, “I really consider myself so incredibly lucky to have been given the chance to do this and it will always remain one of the most incredible days of my life – 400 meters that I will never, ever forget!”

The Olympic torch relay around the UK will take 70 days and travel 8000 miles from Greece around the UK and will ignite the flame in London to start the games this Friday at 9pm in London (1pm Pacific Daylight Time).

Johnson says, “One of the biggest (and nicest) surprises was the fact that, even though the run was over, the excitement did not end there: Afterwards everywhere I went with the torch I was mobbed by people wanting to talk to me, touch the torch and have their photo taken with it. At one point I even had a taxi driver yell “torch” as he was driving by – he literally stopped his cab in the middle of the street, holding up all the traffic, so that he could have his photo taken with me in the cab.” He continues, “The next day I took the torch to London for the Queen’s Jubilee and the response was the same: the torch has an ethereal beauty to it and its effect on people is just magical.”

Johnson lives in Larkspur in Marin County and works for VISA. He was chosen to carry the Olympic flame because of his accomplishments as a Business Leader in Global Risk and Authentication Products for Visa Inc. VISA is one of the top sponsors for the Olympic games.

Johnson says this was his first time in Liverpool. He grew up in Brighton which is on the South Coast 60 miles below London. VISA moved him from London to California. He says, “I originally told them I would only stay for 6 months but that was 7 years ago! I love it here, I met my wife, Kelley, here (she’s Californian born and raised!) and I could not imagine living anywhere else other than Marin and Groveland.”

Johnson and his Olympic torch will make an unofficial celebratory appearance at Pine Mountain Lake’s The Grill restaurant to watch the 2012 London opening ceremony on Friday. Johnson says, “My wife and I are very excited to see the start of the games in which I played my own small part.”