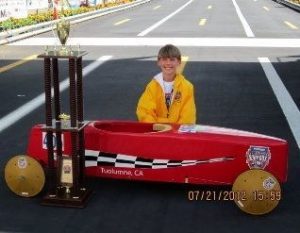 American Soap Box Derby (AASBD) World Championship is held annually in Akron, Ohio every July. Each champion receives a $5,000 scholarship. The 75th edition of the race featured more than 500 boys and girls competing from 12 rally regions. International participants can participate in rallies held in the United States and accrue points to race in the World Championship.

12-year-old Khachigan qualified for the World Championship by taking first place on at the Northern California All-American Soap Box Derby Championship. That race is held during the Tuolumne Lumber Jubilee in June. His brother Ashton Khachigan also won first place in that event in the Super Stock division for ages 10 to 17.

In 2011 the City of Tuolumne received the “Outstanding Race City” award in recognition of the generous community support for Soap Box Derby racing.

Both Khachigan boys are competing in the National Derby Rallies this week in Kentucky. According to the NDR website updated July 19th Alexander Khachigan is in 5th place.

American Soap Box Derby (AASBD) is known as “The Greatest Amateur Racing Event in the World” and the Ohio event has done gravity racing since 1933.