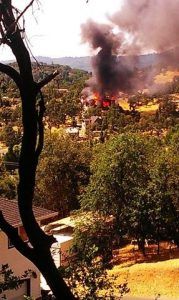 Soulsbyville, CA — Officials are investigating the cause of a fire that destroyed a Soulsbyville residence.

The home near the intersection of Caylor Drive and Carlozzi Drive was destroyed at around 2:45pm on Sunday. A woman and son were living in the home, and no injuries were reported. Tuolumne County Sheriff’s Office Spokesperson Sgt. Jeff Wilson says deputies were briefly called in to assist, but no evacuations were needed.

Air and ground resources spent several hours extinguishing the blaze as it was in an area that was somewhat difficult to access. To view a map of the area, click here.