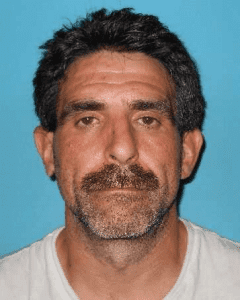 Just after midnight this past Friday, deputies responded to the 7-Eleven convenience store in Twain Harte for a report of an assault.

Arriving deputies heard that following a physical altercation between 48-year-old Gerald Kinder and another man, Kinder punched the victim in the face, knocking him to the ground at the front of the store where the man hit the back of his head on concrete.

Kinder left the area but was located at his residence the following day and arrested for battery with a serious bodily injury.

On Saturday evening, deputies responded to a Twain Harte home on Highland Drive for a domestic disturbance. Officials say that during a physical altercation, 28-year-old Alec Andalon grabbed the victim’s neck from behind, held her down with his knee, and punched her several times in the head.

After pinning the victim down by the shoulders so she could not get up he allegedly took her cellphone while she attempted to call for help and smashed it. He subsequently left the scene in the victim’s vehicle. The woman suffered some scratches and red marks to her cheek, nose, neck, and arm and complained of head and neck pain.

Deputies found Andalon at his place of employment and arrested him. He faces charges of spousal abuse, false imprisonment, vandalism, and destroying a wireless communication device.

Also on Saturday, deputies responded for a reported dispute at a transient camp near Highway 108 and Stockton Road in Sonora. Upon their arrival, a male suspect, later identified as 19-year-old Russell Sherrets, was yelling at a female victim.

They learned her head, facial and neck injuries were due to an alleged attack where he reportedly slapped and choked the female along with hitting her with a tent pole. Sherrets also threatened to shoot the victim with a gun and she believed he had the ability to carry out the threats.

He was booked into the Tuolumne County Jail for spousal abuse, criminal threats, and an outstanding warrant for battery and burglary.