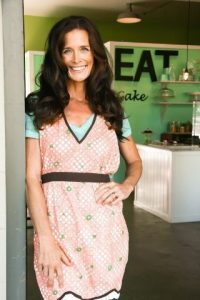 
Henderson has had to keep her mouth shut about the outcome of the show since it was shot back in February in LA. Henderson says “Being on the show was a bit surreal and intense.”

She says one of the comedic mishaps on the show was one of her cupcakes not baking all the way. Hendson says “I stay confident. I thought, well, if one of these cupcakes isn’t good at least I have two other for the judge taste.”

The episode airs this Sunday at 8pm. Henderson’s assistant, Jami Saul, was also on the show. To celebrate their “Cupcake Wars” appearance, there is a Premiere Party at the CAMPS Restaurant in Murphys on Sunday from 7 to 10 pm. There will be a red carpet, bubbly and of course the cupcakes she made on the show.

Henderson says “We live in such a close-knit community and so many people have asked about the shows outcome. We thought we’d just throw a big party so everyone can watch and find out together when it airs.”

Henderson encourages the public to help her celebrate and find out if she won.