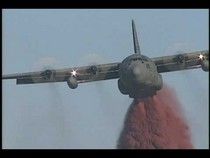 
The entire cost of this mission will be reimbursed by the federal government.

California Governor, Jerry Brown says “We’ve fought some of the nation’s most destructive wild fires in California, and we are putting our personnel, equipment and experience to work in Colorado,” He adds, “Our thoughts are with everyone affected by this disaster.”

Colorado has helped California fight large-scale wildfires in the past. In 2008, when more than 2,000 fires burned across California, Colorado sent local government fire engines and firefighters to assist and the U.S. Air Force Reserve Command in Colorado provided two MAFFS-equipped aircraft.

Major General, David S. Baldwin, Adjutant General of the California National Guard says, “We know how devastating wildfires can be here in California, we bring skilled, highly trained pilots and ground crews with the latest in aerial firefighting equipment to the fight.”

There are eight MAFFS-equipped aircraft in the United States. Two are stationed in California, and all eight have been committed to California fires in the past. The aircraft that will be deployed to Colorado can drop up to 3,000 gallons of water or retardant in a single aerial pass.

The 146th Air Wing will join two other MAFFS-equipped aircraft working the fires in Colorado, which have so far conducted 37 drops of nearly 103,000 gallons of fire retardant.

Congress established the authority for the MAFFS program in the early 1970s to support wild firefighting through an agreement with the U.S. Forest Service.