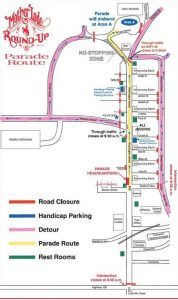 Sonora, CA — Sonora Police officials are sharing all the logistics you need to know regarding the 62nd Mother Lode Round-Up Parade, expected to draw thousands to downtown Sonora on Saturday. Details are as follows…

To see the map for the full visual covering the parade route, parking and closure information, click into the image box. Parade goers — and those traveling in the area who are not coming to the event and want to avoid the road closures — need to know that several streets will close before and during the parade. While detours will be posted for those streets, police want the public to know about the following major street closures:

Police note that residents living in the Tuolumne Street, Calaveras Street, Nevada Street, and Oregon Street areas will be allowed access to their neighborhood from the Highway 108 at South Washington Street closure.

There is “No Parking” on Washington Street between Elkin and Toby streets from 5 a.m. Saturday until the parade clears.

Other “No Parking” zones are as follows: all side streets between Green and Stewart streets; School and Wykoff streets; also portions of Snell Street; Stockton Road between Washington Street and 70 W. Stockton Road (Cazadora Restaurant). Signs are posted and any vehicles parked in these will be towed.

Sonora Police advise those planning on attending the parade to arrive before 9 a.m. to find parking and settle in. Participant drop-off access will be on South Washington Street, south of Restano Way. No access will be allowed from Mono Way after 9 a.m., and there will be absolutely no stopping to unload from Mono Way once traffic controls are in place.

Motorists traveling eastbound on Stockton Road will be detoured at Forest Road. Those who continue Stockton Road will be turned around prior to the Green Street intersection. Large tractor-trailer type vehicles which reach this point may have to remain parked until the conclusion of the parade. Motorists can expect heavy vehicle and pedestrian traffic after the parade, so police ask for patience and use of extreme caution when traveling in this area.

Alternate routes are follows: westbound Mono Way traffic will be detoured onto Stewart Street at Restano Way; motorists seeking access to Stockton Road will need to use Highway 108.

Alcohol In The Streets Allowed With Caveats

Chief Turu VanderWiel explains that under a special resolution passed by the city council, from 10 a.m. for the duration of the parade until the streets are reopened, alcoholic beverages are allowed within the parade’s cordoned area. Specifically, he outlines the area as Snell at School streets, down Washington Street/49 to Restano Way; also in between Stewart and Green streets bordering Washington Street.

The first caveat is no glass containers will be allowed on the streets, sidewalks and other public areas as the parade is a family-friendly event and public safety is paramount. “We don’t want broken glass, sharp objects, projectiles or anything that could hurt somebody,” the chief explains. So, he says, keep it to cans and plastic containers. He adds. “Naturally, like anywhere else, if we somebody who we believe may be under the age of 21, we will check their ID.”

He notes that one of the questions he is hearing a lot is exactly what downtown businesses with ABC licenses are allowed to do, and emphasizes that the city council resolution does not change the terms of those licenses. “Although people can drink alcohol in the streets, you cannot pour from a licensed establishment and walk out of that door with an open container,” the chief warns.

Businesses who can sell closed cans of alcohol, such as a can of beer, are allowed to do so. Then, he says, “As long as it stays closed, the purchaser can walk outside, turn the corner and open it up — as long as they are within those cordoned areas of the parade.”

Anyone with additional questions may call the Sonora Police Department at 209 532-8141.