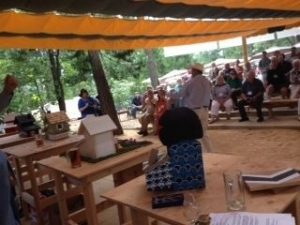 Confidence, CA — The largest fundraiser for Habitat for Humanity of Tuolumne County was held over the weekend.

The total amount raised is still being tabulated, but $9,600 was collected from the live auction and $6,200 from the annual bird house auction.

A special guest this year was former Major League Baseball manager Tony La Russa. (Earlier in the day he spoke at Sonora High School, click here to read about that story) Maryann Curmi of Star 92.7 was the emcee.

The event was held at the Emanuel Lodge in Confidence, which is the home of Habitat supporters Judy and Roger Haughton.

Habitat for Humanity is in the process of constructing the 36-home Parrotts Ferry Village in Columbia. Executive Director Betsy Harden spoke about the plans a few weeks back on Mother Lode Views. To hear the interview, click here.