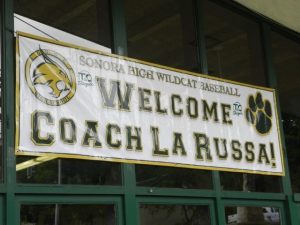 Sonora, CA – One of the most successful managers in baseball history is making a pair of stops in Tuolumne County today.

Tony La Russa spoke this morning at a luncheon at Sonora High School to benefit the SHS baseball program. La Russa gave insight on his management style and told a variety of humorous stories from his baseball days. The crowd broke into laughter several times when he did impersonations of past players, like Rickey Henderson and Dave Stewart.

La Russa also joked about the last time he was ejected during a game. He said he still hasn’t paid the fine to the commissioner’s office because it was such a bad call, and he did nothing to warrant being thrown out. In order to manage again he would have to pay the fine, which is one of the reasons La Russa joked that he won’t be coming out of retirement.

The event was emceed by Jim Todd, who helped coordinate the fundraiser. Sonora High Varsity Coach Scott Johnson thanked everyone who came out for the event. He noted that the baseball team’s budget basically covers the costs to purchase balls and attend two tournaments. The rest is raised from things like fundraisers and donations.

La Russa is also spending time this afternoon at the 4th annual Habitat For Humanity House Party at the home of his friends Roger and Judy Haughton in Confidence. For more information on that event, click here.

La Russa spent 33 years as a Manager with the Chicago White Sox, Oakland Athletics and St. Louis Cardinals. He retired last year after his Cardinals won the World Series. He ranks third all-time in Major League victories, and is one of only two managers to win a World Series in both the American and National Leagues. La Russa will be the manager of the National League All Star team later this summer, a job which is held down by the winning manager of the previous World Series.