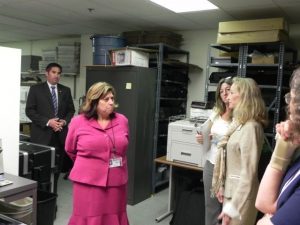 Sonora, CA — Tuolumne County Chief Election official, Debi Russell says, “We have processed all of the provisional votes. In Tuolumne County 16,074 people voted. Karl Rodefer is three votes shy of being called 50% plus one.”

If he had made the 50% plus one, there would be no need for a run off for the seat in November.  With the vote so close, Rodefer could pay around $700 for a recount.

Karl Rodefer says, “I was happy with the rules going in and I am happy with the rules right now.” Rodefer added, “I can live with those results, but I will have see what the official certified numbers show and decide after that on a recount.  However, I am looking to a good hard aggressive campaign in the [November] general election, if that is what is necessary.”

Russell says Rodefer will have five days after the election is certified to call for a recount. Otherwise, he will face a run off with Domenic Torchia who is in second place.

Also, In the District One race, Liz Bass was able to keep her lead over Jim Hildreth, so she will face a run-off against Sherri Brennen in November.