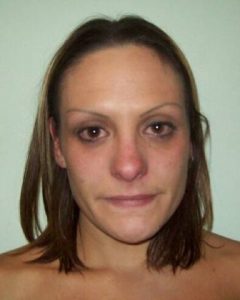 Sonora, CA — Saturday evening, June 8th, officers from the Sonora Police Department observed a male and female subject acting suspicious around what was found to be a stolen Escalade with a quarter pound of methamphetamine inside.

The 2004 Cadillac Escalade was parked in the Sonora Shopping Plaza on Mono Way. The suspicious individuals identified themselves as Frank Phillips, 28 of Stockton and Nicole Halvorsen, 28 of Stockton. Phillips is an AB 109 release on probation. Both Phillips and Halvorsen denied any association with the vehicle.

According to Sonora Police Chief, Mark Stinson, the officers determined that the Escalade was stolen out of Manteca. Then they found Halvorsen’s purse and identification inside the stolen vehicle. Phillips was found in possession of the key to the vehicle which, according to the report he had hid in a body cavity to avoid detection.

During a search of the vehicle a quarter pound of methamphetamine was located. The estimated street value of the methamphetamine is $6,800. Phillips was also in possession of $2,100 in cash. Phillips and Halvorsen were taken into custody and transported to the Tuolumne County Jail.

Halvorsen was booked for: felony conspiracy, misdemeanor concealing or destroying evidence, and an infraction possession of marijuana.