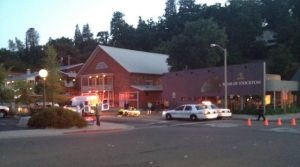 A truck collided with a motorcycle Tuesday night in downtown Sonora.

The Sonora Police Department reports that 47-year-old W. Allen Flud of Jamestown was taken by ambulance to Sonora Regional Medical Center, and later flown to Doctors Memorial Hospital in Modesto.

Flud was riding on South Washington Street near the Sonora Opera Hall. The SPD reports that a Dodge Ram Truck was traveling in the opposing lane of South Washington, and the driver failed to yield the right-of-way while turning onto Church Street. Flud was unable to avoid the truck, driven by 22-year-old Ariel Diggan of Sonora, and was ejected from the Harley Davidson.

The accident happened at 8:20pm, and South Washington Street was closed for approximately 45 minutes. The extent of Flud’s injuries is not immediately known.