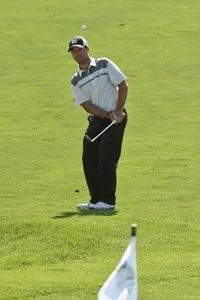 “It was an awesome way to go out, and a great week,” says Rei. “Unfortunately we didn’t win, but we played great.”

The Chico State golf team is coached by T.L. Brown, who says Rei really came into his own over the past two seasons. “Kevin works extremely hard, and he’s very passionate,” says Brown. “Even though we didn’t win the national championship, we battled as hard as we could, and we definitely would not have been there without Kevin on the roster.”

Rei says he started golfing at around age five, when his father (Peter Rei), sawed off an old five iron and put on a “makeshift grip.”

“I just kept hitting the ball, and looking back, I guess everything worked out,” says Rei.

Rei later played with the Sonora High golf team, under Coach Steve Lee, before graduating in 2008.

Rei says he plans to finish his schooling next year at Chico State, and then decide whether to try and continue his golf career at the post collegiate level. He is the second class of 2008 Sonora High athlete to be recently honored at the college level. Click here to read an article about Lexi Kopf.