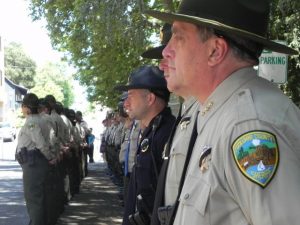 Seven California officers were killed by gunfire in 2011. CHP officials say it’s a way for officers to grieve the loss and remember the families.

The memorial included a bagpipe player, horns belting out taps, a gun salute and singing of the National Anthem.

Local officers were on hand from the CHP, Sonora PD, Sheriff’s Office and other agencies. Assemblywoman Kristin Olsen was the keynote speaker.

If you want to see video of todays memorial click on the MyNews camera on the home page.