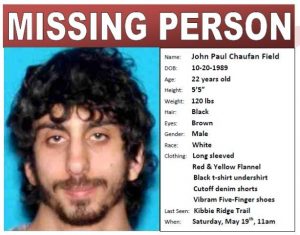 Yosemite, CA — A missing hiker in Yosemite National Park has been found safe and healthy.

John Paul Chufan Field was spotted by a park helicopter late yesterday, about five miles east of Kibbie Lake, the point where he was last seen. Field was transported from the backcountry to the Hetch Hetchy Ranger station.

Field was found to be in good general health. The 22-year-old UC Santa Cruz student had been last seen on Saturday afternoon while hiking with a group of other students.