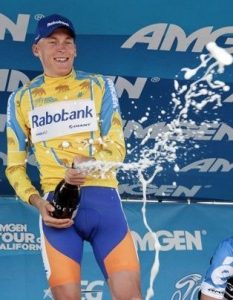 A rider that fractured his leg just eight months ago was the big winner of the 2012 Amgen Tour of California.

25-year-old Dutchman Robert Gesink took first place on Saturday, giving him a 46 second lead heading into Sunday’s finale from Beverly Hills to L.A. Live in Los Angeles. Peter Sagan was the fastest on Sunday, but Gesink had enough of a cushion to finish first overall.

“Coming back from a leg injury is a big thing,” says Gesink. “For me, emotionally, is something really big to be back at this high level and to win a stage here, the toughest stage of all. It’s a good thing to be back in California and to be winning again.”

Gesink had injured his leg in a training exercise.