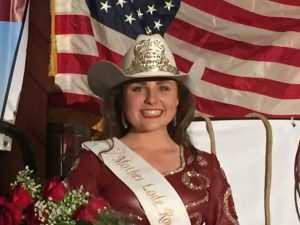 Shortly before Rogers was announced the winner, various awards were handed out to the candidates. For example, Rogers was recognized for horsemanship, congeniality and speech, while Gookin won honors for interview skills and being most photogenic.

Rogers jokes, “During the entire time, I was just holding my breath, and I couldn’t breathe.”

Rogers, a junior at Sonora High School, was then announced the winner, and the crowd burst into applause.

She is the daughter of Chris and Shasta Rogers, and her sister, Karissa, was the 2016 Roundup Queen.

Looking ahead, she says, “It is going to be a busy week, I don’t know what my favorite part is going to be, but I’m definitely looking forward to the parade and rodeo on Saturday.