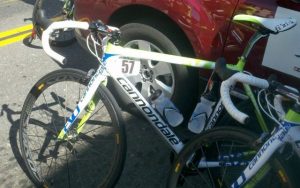 Stage Four of the Tour of California left Sonora at 10:35am and riders traveled 130 miles, encountering numerous mountain climbs and twisting roads while skirting Yosemite National Park. The 22-year-old Sagan has now taken the first four stages of this year’s tour.

“It was a surprise,” said Sagan at a press conference afterwards. “Today was a very hard day and the weather was very hot.”

Temperatures were in the 90’s when the riders arrived in downtown Clovis at around 4pm.

“I wasn’t expecting another victory but after the last climb my teammate, Daniel Oss, said to me, ‘Today we win another stage,’ added Sagan. “And I said, ‘I don’t think so,’ but after he made the suggestion, I said to myself, ‘Yeah, okay. We’ll try.”

To view an earlier article about the start of Stage Four with photos and videos, click here.